I sometimes find myself on engagements in a network with no credentials and not much going on for me. Responder doesn’t always give me anything juicy and other more aggressive attack primitives are scoped out or impossible to execute.

However, a quick port scan reveals port 8089 exposed on a couple of hosts. More often than not, this means a Splunk agent is installed. I’ve seen research on how to abuse Splunk for such purposes, but I had yet to try it myself.

I decided to configure Splunk in my lab to find out if it is possible to achieve RCE on any host with the Splunk Universal Forwarder installed, given access to the same network. Spoiler alert: the answer is yes.

The underlying issue here is that the Splunk Universal Forwarder (UF) does not by default enforce any authentication of the Splunk Deployment Server (DS). In a default install there is a default TLS certificate present, which is not enforced. Because the UF does not verify the DS, it will accept any DS. This means this communication becomes extremely vulnerable to man-in-the-middle attacks, as there is basically no authentication between the two components.

I discovered that Splunk even warns about the issue in the splunkd log on the UF.

What do we achieve from this attack?

Note that there is a temporary consequence of this attack. When you hijack all Splunk management traffic from an endpoint, the endpoint will temporarily lose all its deployed Apps and be replaced by yours. Once the attack is stopped it should automatically connect back to the real deployment server and redownload it’s apps. I have verified in a real production environment that this works reliably. However, all logs captured while the attack is ongoing is not sent to the real Deployment Server and is lost. You should inform the party that gave you consent to this attack of this consequence and ensure they agree to it.

Note that Splunk has no authentication between the Universal Forwarder and Deployment Server. Thus, all we need to do is tell clients you are the forwarder, which is exactly what we do in this attack.

Components of the attack

I found a useful diagram that displays some of the Splunk components and what ports they use for communication. Most of it is beyond the scope of this simple demo, but it’s worth taking a look at it to get familiar with Splunk infrastructure.

In a real scenario you will not have access to the target (duh). I included this section so you can replicate the attack in your lab.

Do a netstat to verify port 8089 is exposed 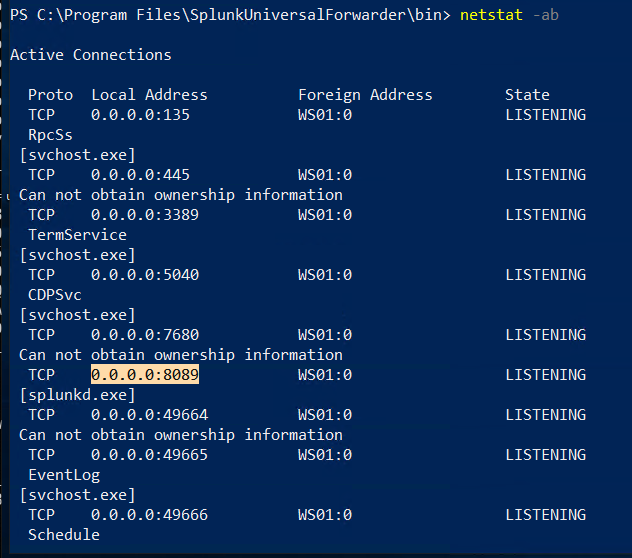 Configure the forwarder to contact the “real” Deployment Server. The default credentials are admin/changme.

Splunk Enterprise can be downloaded for free with a login from the Splunk website. Assuming a Debian based OS, install the deb file with apt

Once the server is installed, start it 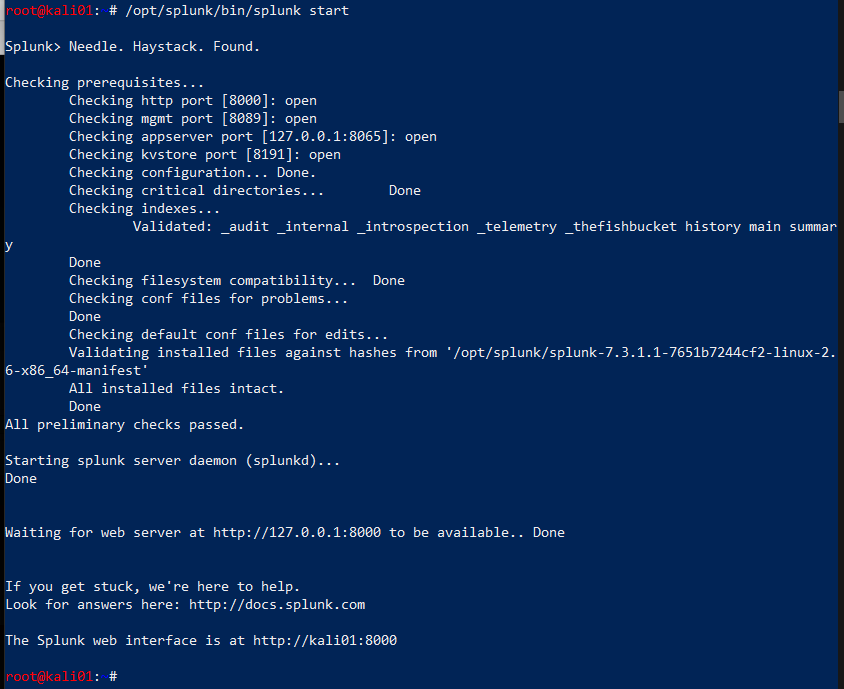 We need to ARP spoof the target to be able to say we are the deployment server. However, we are not always lucky enough to be in the same network as the real Deployment Server. Hence, we need to find out where it is, and spoof it. We do that by spoofing the default gateway for our target, consequently routing everything through us.

Instantly upon execution, ARP replies are coming in.

If you are lucky, the DS is in the same network as your attacker host and target. If it is you can just ARP spoof that server directly. However, if the DS is in a different network, you need to find out where the DS is.

Note: when I did this I had both SSH and RDP going on to the boxes, so I filtered those and ARP requests, and focus on traffic to and from my target. We know that UFs communicate outbound on 8089 so we can filter on that.

We see that it’s trying to reach out to a host on a different network on port 8089. This is most likely the deployment server it has been configured for.

We know from tcpdump that the real DS is at 172.16.0.2. This is a property configured on the forwarder, so there is little we can do about that. We need to trick traffic to that IP to go to our deployment server. My solution to this was configuring another IP address on the eth0 interface, which will then always have a shorter route to that IP than to the real DS. For this, we configure an IP address on eth0 with the IP address of the real DS.

We verify that we have a route, but this should be obvious really.

Note that Splunk exposes itself on 0.0.0.0 so 8089 is not bound to any specific interface on the attacking host. This means Splunk will be accessible on all interfaces and IPs you configure.

Note: in an earlier version of the article I used an alias interface for this, which was completely unnecessary because the ip command natively support multiple IP addresses on an interface.

I also played with DNS spoofing to simply hijack the DNS query for the Deployment Server, but I had trouble getting it to succeed consistently.

We are going to prepare a Splunk app that will be deployed to the target. We don’t care for implementing this ourselves when numerous projects are easily available on Github. We chose the repo reverse_shell_splunk for the job. This app will simply run a bat file that runs a Powershell-script, which executes a reverse shell.

Note that such a shell might trigger anti-malware alert and get blocked. I would suggest doing something that could be considered more opsec safe, like adding a local user and adding it to the local administrators group.

We clone the repo and edit the run.ps1 file to our attacker IP and port where we will be listening.

We then copy the entire folder over to the deployment-apps directory.

We are nearly there, so we set up a listener on the attacker host

We now use the web interface to deploy the package we configured earlier to our target. Once you click save in the final step here, the App is deployed and will be installed on all specified clients. That means your payload will be firing!

To deploy Apps to specific hosts they have to be part of a Server Class. We configure this by doing the following: 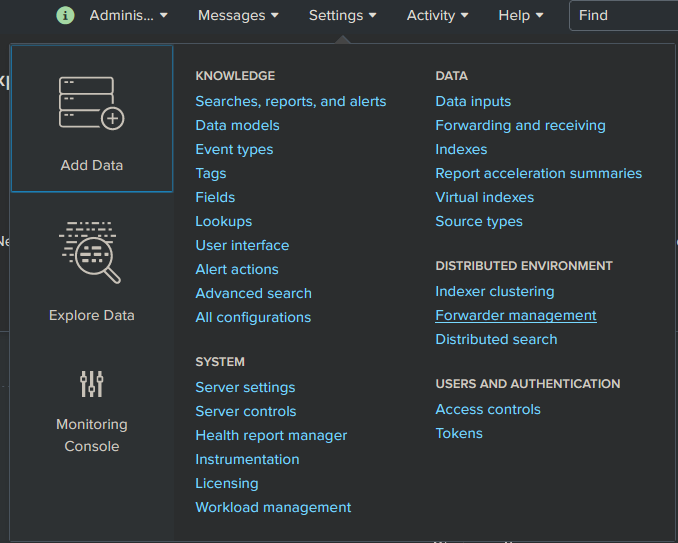 Most likely you will see it already has 1 client phoned home already. And you will see the app you placed in your folder.

Give it a name 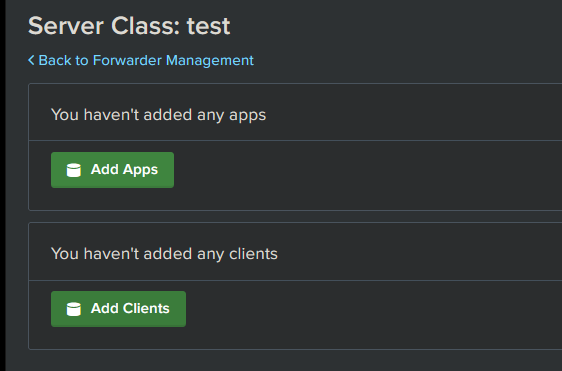 Click the app in Unselected App and it will automagically move over to Selected app. 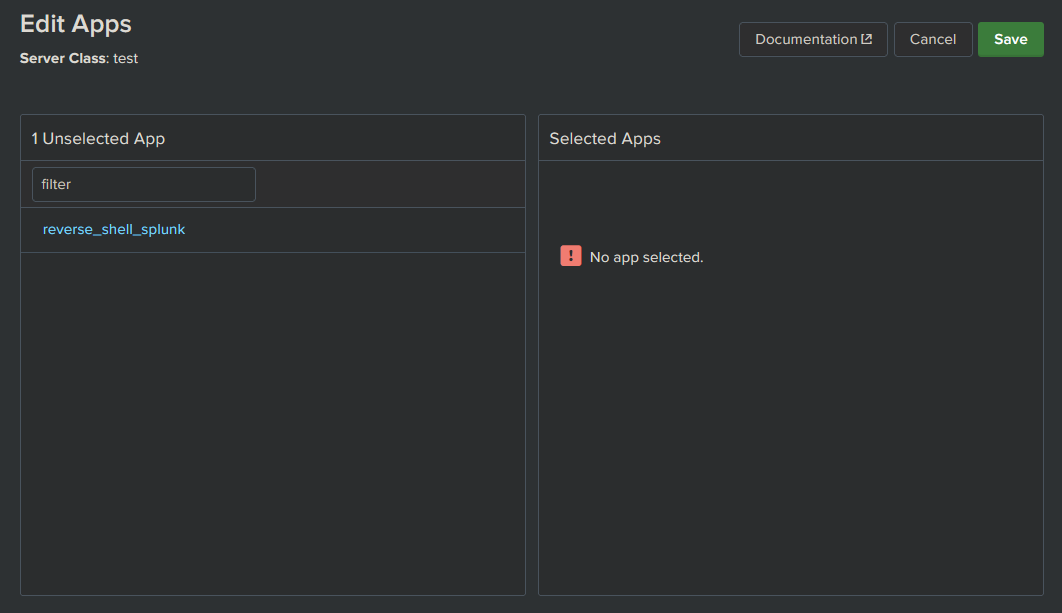 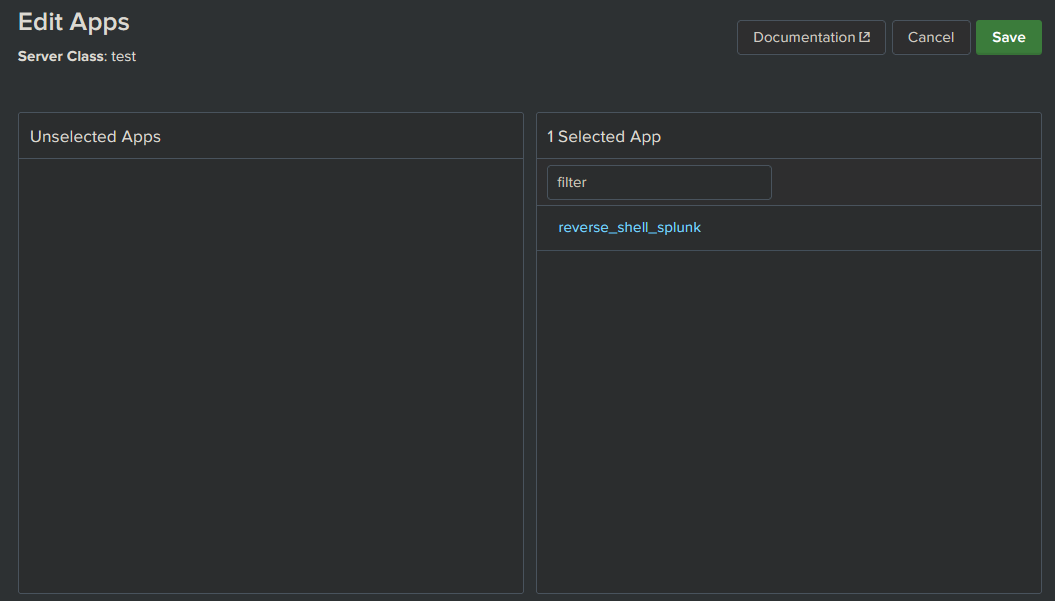 Click Edit on the App and in that new view, ensure Restart Splunkd is checked. If not, the splunk deamon on the target won’t restart and execute it’s new app. Once done, click Save. 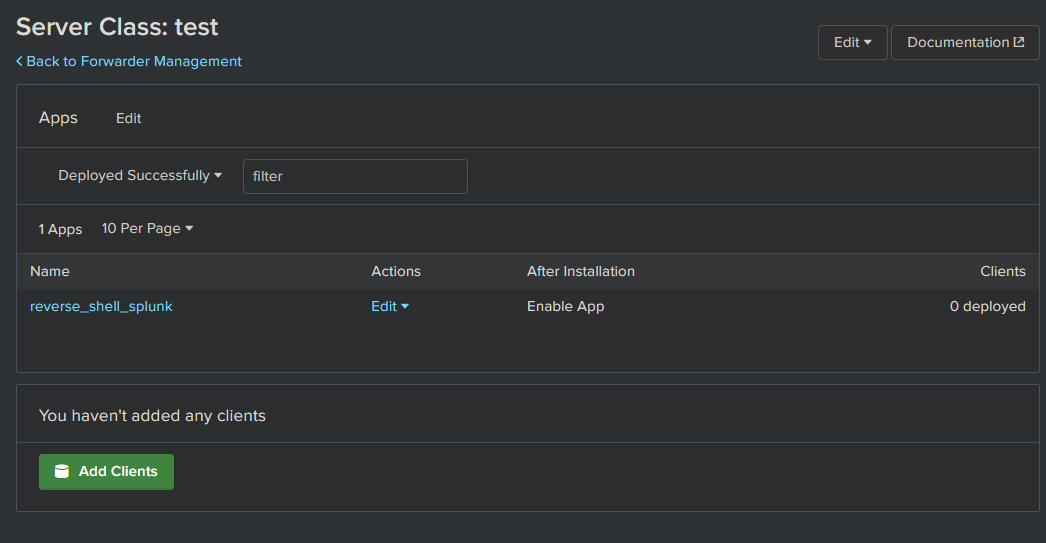 Now, everything is ready and all we need to do is execute the actual attack. This will happen quickly once we click Save, so we make sure everything is all set up before we click.

Specify the client in the whitelisting , which is our target and click Save. 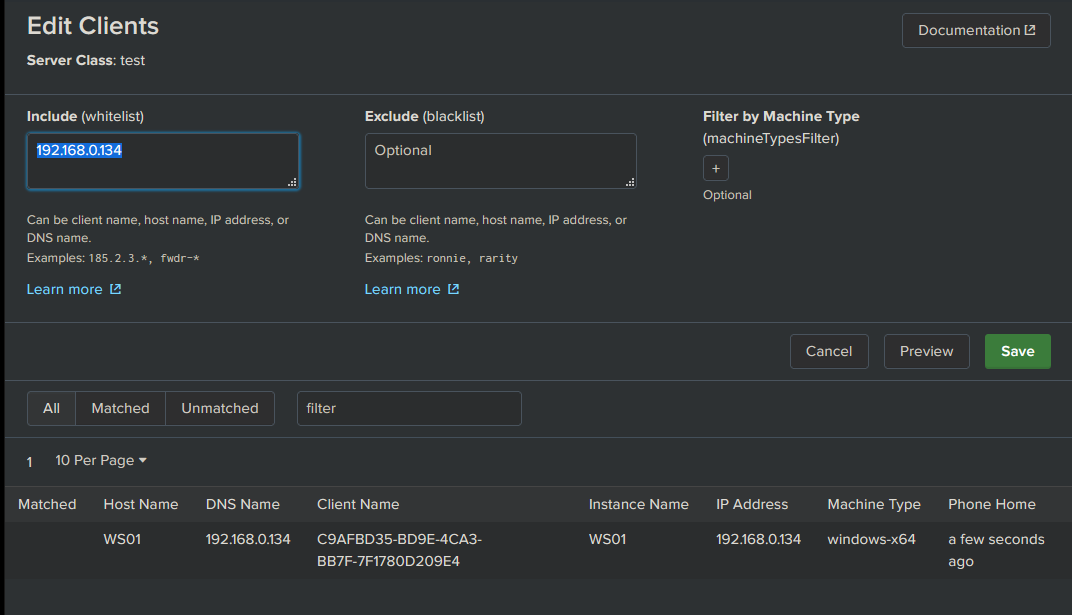 Next time the client phones home, the DS should deploy the new App fairly quickly, and give us some feedback when it has. 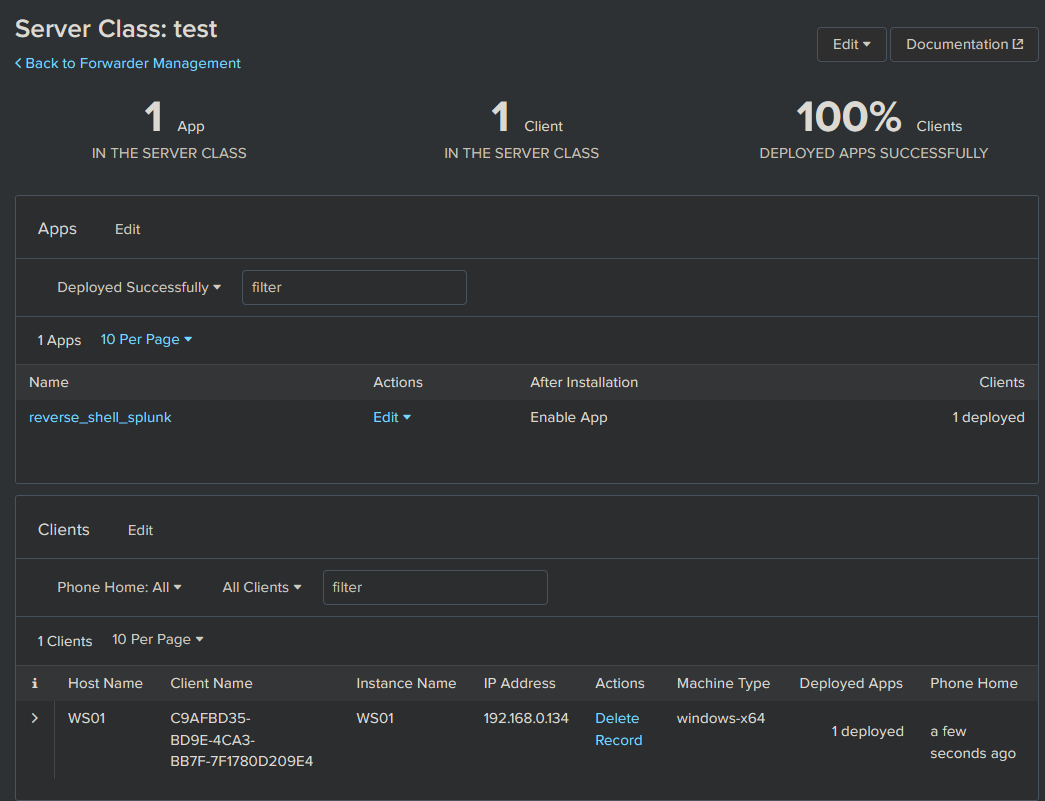 And there it is! Our beloved SYSTEM shell which we obtained from nothing but network access and some clever Splunk trickery.

Polling for new apps will always be initiated by the client, so we simply have to wait. If we are impatient and just want to simulate the attack, we can log on to the target host and force a restart of the UF.

After the restart we monitor using tcpdump, where we should see the target start connecting to our fake DS, thus installing the deployed app and execute the payload.

Note that the location of the deployed apps on the Windows endpoint is C:\Program Files\SplunkUniversalForwarder\etc\apps. You should see your malicious app here.

Usually, if nothing appears to get executed the payload is caught by anti-malware. I would suggest an opsec safe payload.

The other alternative is that you messed up the path structure of the app. It should look something like this:

As this attack consists of several components, there are several mitigations that apply to it.

ARP spoofing has been and still is possible to do in most broadcast domains. Dynamic ARP inspection (DAI) can prevent this by intercepting all ARP requests and responses. Each intercepted packet is verified for valid MAC address to IP bindings. The best information on this I could find was some Cisco documentation. There are also a vast range of third party solutions available.

Note that the cost of implementing this in large enterprise networks may not benefit the risk. You could also make the argument that we should be able to trust the protocols like TLS to not force us to apply mitigations at this layer.

In all the Splunk environments I have tested, the UF has not been configured to enforce the TLS certificate for the Deployment Server, which is the primary reason the attack demonstrated in this post works. Because the UF does not verify the DS, it will accept any DS. To mitigate this, configure Splunk forwarding to use your own certificates. Ensure the certificate is enforced in deploymentclient.conf. This setting is sslVerifyServerCert = <bool>.

It is possible to deploy the certificate with a Splunk app. If you can guarantee the integrity of the initial deployment of an app, deploying certificates that way is probably one of the easiest ways. It will be almost like an initial handshake for the authentication between UF and DS.

With this said, ensuring clients suddenly don’t have certs that expire can be a bit of a maintenance nightmare.

@bravo2day and @silkeslips started looking into mitigating this vulnerability by tunneling the Deployment Server traffic through an IPsec tunnel. Using the Windows firewall it is apparently possible to make the UF connect to the same address, but using a connection security rule to establish an IPsec tunnel for traffic to destination port 8089. Note that since both Cluster Master and Deployment Server traffic is destination port 8089, this will make both services go through the tunnel. This solution might be more efficient than implementing PKI for an enterprise. I think it’s a very creative solution to mitigate this vulnerability.

I found another article describing possible mitigations for this issue. While it did identify a way to make sure only authorized UFs are allowed to connect to the DS, it did not identify any workaround or mitigation for the authentication issue.

Using other systems for deploying apps

It could be possible to not use a Deployment Server at all, and rely on other systems to deploy apps, like SCCM or perhaps even configuration management tools like Ansible, Puppet, etc.

Splunk support running the UF in low-privilege mode. This will prevent the agent from running as SYSTEM and attacker getting access with those privileges. This is definitely not always desirable as you will not get complete logging from an endpoint without elevated privileges.

The following documentation shows how to secure and harden Splunk installations